In talks with Michelle Corasanti, author of international best seller "The Almond Tree" 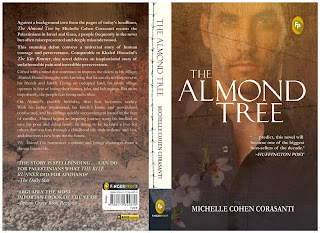 Interview of Michelle Corasanti, writer of international best seller "The Almond Tree"
a)MC through your novel you have turned into Palestine activist, have you seen youth associating with your cause and with your writing?
The experience of reading The Almond Tree changes people of all ages’ perception of Palestinians. Let’s face it, most people only care about what happens to them in their daily life, in their small world. They don’t care about another people in a distant land. Neither did I until I became a witness to what I didn’t want to see. Through the characters in The Almond Tree, the reader steps into the shoes of a Palestinian and sees what it’s like to be him. Throughout the novel, I tried to keep my writing as cold as possible because if I don’t tell the reader how my characters feel, I force the reader to project his feelings onto the characters. That creates empathy. That is why so many people feel as though the story is happening to them.

b)Do tell our readers something about your novel? Are you happy with the response to your debut novel? I’m thrilled with the response. Ever since I lived in Israel, I wanted to try and find a way to shine a light and show a better way. I’ve been able to do that through The Almond Tree. People who could care less about the conflict are reading it. A writer can reach into readers’ hearts and change them. I’m not advocating hate, I’m trying to show how strong we could be if we worked together to advance humanity instead of dividing and destroying each other. The vast majority of readers are responding to my book extremely positively. Of course you will always have a few extremists on both sides. On the Jewish side a few people have said it’s biased. On the Palestinian side, I have been accused of hijacking the Palestinian narrative. The reality is that I’ve written a novel in first person in the voice of a Palestinian. If he saw through Israeli eyes, it would be unbelievable. I didn’t write the Palestinian narrative, nor did I write the Israeli narrative. I did what President Obama asked an auditorium packed with Jewish Israelis to do, namely, try and put yourself in Palestinian shoes and see the world through their eyes. In conflict resolution, you are taught that it’s important to try and put yourself in the other’s shoes, and that’s what I have tried to do.

c)There are many issues like Kashmir issue, Afghanistan conflict, in your opinion do you think that literature can bring a change in outlook? Till now we used to hear biased information and views, on these issues .
A powerful story can change the world. Look at how the Kite Runner changed the way millions of people thought about Afghanistan, for example. I have been thrilled to have others see this possibility for The Almond Tree. I am attaching an article about The Almond Tree that appeared in the Huffington Post that addresses this question more eloquently than I could.

d)What are your future projects? Will you again raise awareness through your writing, on certain unresolved international issue?
I am trying to finish my next novel. This one is from the POV of a Jewish American woman and her relationship with a Palestinian man. I write about what I know, saw, lived, witnessed, learned and heard and this novel is based on many of the experiences I had while living in Israel for seven years, studying Middle Eastern studies for a decade, and the countless stories told to me by Palestinian and Israeli friends over the years. I wish I could shine a light on all injustices, but I can’t.

e)Who are your favorite writers, who inspired your thinking and writing process?
The only reason I became a writer is that I read Khaled Hosseini’s book The Kite Runner. That book showed me how to put a non-Palestinian in a Palestinian’s shoes. In the novel, Hosseini writes about how Amir was a Sunni and Hasan a Shiite and how nothing was ever going to change that, but then I remembered the glimmer of hope I had seen at Harvard with a team of scientists working together who were Palestinian, Israeli and American -- that became the seed for my story.
f)Do give some message to our readers.
May the battles that we fight be for the advancement of humanity. Thank you so much for the interview.