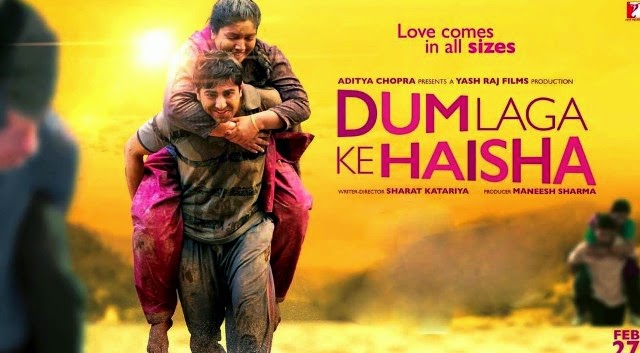 Review of Dum Laga Ke Haisha Movie- YRF Films The movie is fun to watch and very entertaining. I fell in love with the simplicity of the sets and narration. It definitely evokes nostalgia, when the world was much simpler and happy without facebooks, watsapp and ipods. The good old cassette days are bought back. The story is centered in Haridwar with Ayushman Khurana portraying a role of a docile son “Prem”. Though he is not very vocal but through his expressions and frustrations, one can easily sense the things that he wants to have. He gets into an arrange marriage with “Sandhya Verma” a role beautifully portrayed by Bhumi Pednekar. Both are totally opposite to each other, in looks as well as in temperament. Bhumi is fat whereas the groom is thin, and she is a woman with ambitions not lost like her husband. The movie also hits on Indian Psyche of getting a slim bride. It establishes the fact that whether the guy deserves or not but all want slim, petite chic, without realizing their own shortcomings. It also throws light on the fact that how arrange marriages are settled. In the movie, parents ignored the wish of Khurana on the basis that the would be bride is B.Ed and will get money in the house, which will bail them out of the troubled times. The girl very rightfully says that she has no complaints against the guy but definitely have complaints against the father who should have paid more attention to his son’s studies and wishes. The weak point of the movie is that more time should have been given in developing the chemistry between the lead pair. The second half happens in bit of rush , where you start wondering when the bond developed between the two. The narration falters from this angle. All the characters have played there part brilliantly. Sanjay Mishra beautifully portrays the role of a small town father, who believes in controlling his children. Alka Amin as his subdued wife shows brilliantly. Even the role of aunt played by Sheeba Chaddha deserves an applause , she is the catalyst who takes the plot forward. It is worth watching movie.