Book Review of Where Angels Prey 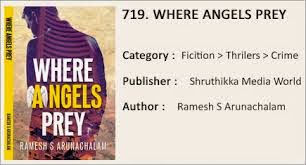 Where Angels Prey,is a well crafted novel. The author Ramesh S. Arunachalam has picked up a complex issue of micro finance, and have weaved a thrilling story around the same. Nowhere the book will bore you, infact the complex financial lingos have been explained in simpler terms. The novel is inspired by real life events in Andhra Pradesh, Ramesh fictionalized account exposes the double-edged sword that emerges, when no safeguards are put into place.

The plot further thickens, with the involvement of Wall Street and other tech majors, investing billions in this sector. The question that arise is -Why sudden interest of Wall Street in India's poor?. That is exactly what Robert Bradlee, senior correspondent with The New York Post, sets off to investigate, along with his journalist friend, Chandresh. Little does he know that his search for a scoop would lead him through a complex multi-pronged web of deceit, fraud, manipulation and financial crime, remote controlled from distant lands by an entire chain of financial sector stakeholders. The nexus is so deep that right from politicians, local goons, ngo's all are involved in exploiting the people, on the lowest rung of pyramid. The novel also highlights the dedication and the honest attitude of two IAS officers Subba Rao and Veena Mehta, who tries to provide justice to the poor.

Though the story ends on a dark note, that in India if one has money and power, then they are above law, irrespective of the crime one has committed. I would like to partially disagree with this sentiment, with Sanjay Dutt arrest and many other celebs being dragged to court, probably things are looking upwards.

I would definitely suggest to pick up this novel for::