Review of Margarita with a Straw 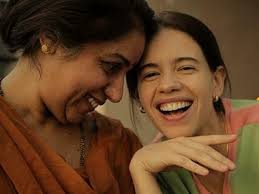 The film is on a very delicate topic of Cerebral Palsy and sexuality. For those of you who do not know about Cerebral palsy, it is a neurological disorder which affects body movement, muscle control, muscle coordination, posture and balance. It can also impact fine motor skills, gross motor skills and oral motor functioning. But it is not necessary that a person may be mentally retarded. His thinking, understanding all the faculties might be intact. The movie shows Kalki suffering from Cerebral Palsy, her speech is blurred and motor movements affected. Otherwise she is a normal teenager, with normal fantasises .The director Shonali Bose has tried to do full justice to the subject.

The movie highlights the sexual fantasies of differently abled people. Often normal human beings, only have an attitude of sympathy for differently abled people, without realising that they are human beings in their own self, with dreams and desires. It also, delicately brings out the subject of same sex love. It doesn’t look vulgar or gross, but it looks gentle and beautiful. A viewer can understand the growing bond between Kalki and Sayani Gupta.

The movie starts showing Laila(Kalki Koechlin) a talented member of rock band. She had feelings for one of the band guys. But the guy refuses to acknowledge her feeling. She was heartbroken, but consolation comes in terms of her admission to New York University. Here she meets Khanum (Sayani Gupta),who is an activist and they both fall for each other. At the same time there is a guy in Laila’s class Jared, who is attracted to her and even Laila has feelings for him. This plot highlights the bisexual angle. Laila gets major support from her mother Revathi, who falls ill, and she has to return to India with Khanum. Further the plot unfolds beautifully, showcasing what all happens in laila’s life, after she returns to India.

Why you should watch this movie:
a) Extraordinary and sensitive plot.


c) Understand the dreams and fantasies of differently abled people.