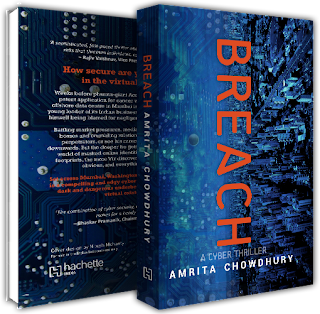 After ages I have read an interesting digital thriller from an Indian author. Kudos to Amrita Chowdhury, for picking up the topic of cyber-crime and weaving an interesting plot around it. In India with less internet penetration, we are still not bothered with the cyber crime, we have other big crimes to grab our attention. But still the invasion of digital world cannot be ignored. In a country where half of the population, barely knows how to operate computers, cyber security is not the least concern for them. I consider myself fairly net savvy but after reading the novel, even I woke up to certain grim cyber facts.

The plot of the novel unravels across globe, involving US, China, India, Africa and likes. The story starts in US, where a pharma giant is about to file patent for a miraculous drug against cancer. All was going well, but then they start getting data irregularity from there Indian office, which was headed by charismatic Vir. All hell broke loose, a blame game starts, which threaten to ruin many careers. How Vir and his Indian team, break through the corporate espionage makes it an interesting read.

The writer has highlighted many issues through this novel, the parallel world of hackers, the mistrust shown by westerners for the developing nations. The story delicately teaches the reader certain lesson in crisis management. All the characters are beautifully build, where the reader can relate to each character and understand the motivation behind each act.

Though a reader might take time to get a grip on the character and the plot, as in the beginning one gets a feeling that too much is happening too fast. But then once the plot is settled, one cannot put down the book, the plot completely hooks you. The author has tried to explain scientific concepts, in easier terms. The plot also stress on that if you have knowledge then you should know how to use it constructively. One of the character Karthik beautifully emphasise, that at times unknowingly we walk down on the path which leads to further downfall. So choose your path wisely.

Why should you read the novel: