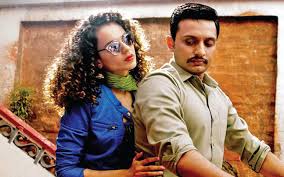 Well to begin with, I would like to congratulate the film fraternity, on making a true sequel. Many sequels have been released, but most of them bear no resemblance with the original plot. Thankfully Tanu Weds Manu Returns break that mold successfully and the kudos goes to the director Anand L. Rai.
I believe that any movie is successful, if one keeps on repeating the dialogues from the movie, in his head. Same thing can be said about this film, there are so many interesting and entertaining dialogues, that one cannot forget. All the actors have done a fabulous role, forget about the main characters, even the side characters are equally prominent and one can safely say, movie wouldn’t have been the same, without their presence. One cannot help but fall in love again with the characters of Pappi,Jassi and Kangna’s friend.
The movie shows what happen after the marriage between Madhvan and kangana. The movie starts showing main characters, standing outside mental institution. Due to the turn of the events Madhvan lands in the asylum, whereas kangana moves back to Kanpur. The story quickly unfolds after Kangana’s return, when she decides to check on all her ex -lovers. Jimmy Shergill has again done a brilliant work as Raja Awasthi. The plot takes us to Jhajjhar and gives us a glimpse of the life present there. In a subtle way the director has also tried to show the evils, running in the society.
Kangana has again proved beyond doubt that she is an actress to look for, she has portrayed both the roles- tanu and datto brilliantly. She has very well adopted the Haryanvi ascent, one can easily feel connected to Datto.
But at times one feel, that the director could have done bit more editing, to make the plot look crispier. There is a big lesson to be taken from this movie, that one doesn’t need grand sets, loud sound, fancy locations but a good movie can be made with a wonderful story.
Why should you watch this, movie: