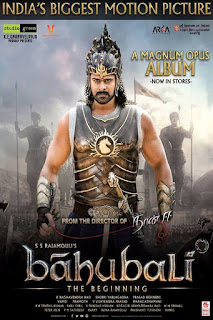 Bahuballi is an Indian Gladiator, it clearly shows the evolution of our animation industry. When I saw the trailer of the movie, honestly I was not much impressed. I thought another copy of Exodus-Gods and Kings, but when I went to saw the movie, I enjoyed it immensely. No doubt, at times few of the scenes, will invoke a sense of dejavu. The movie is epic historical fiction written and directed by S.S.Rajamouli. The movie is made on the ambitious budget of 250 crore (thankfully, which they have recovered) and will be released in two parts. The movie has been dubbed in Tamil, Telgu and Hindi. The movie is treat to the eyes, it is spectacular to watch.

The movie starts showing Sivagami (Ramya Krishnan) being chased by soldiers, while carrying a baby in her arms. She carries the baby above the water surface, while she is submerged in water. Next morning, local villagers save the child while the Sivagami drowns, with her finger pointing to the top. The child was adopted by Sanga and husband, who name him Shiva. 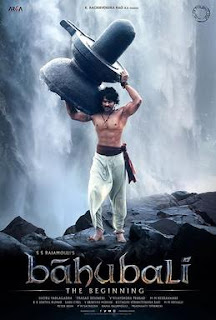 One day Shiva (Prabhas) gets hold of a beautiful mask, to discover the face behind the mask, he decides to go to the top. The mask belong to Avantika (Tamannaah),a rebellious fighter. The group is fighting a war against King Bhalla Deva (Rana Daggubati) of Mahismathi kingdom. They want to rescue Devasena (Shiva’s real mother) who is imprisoned by the king for past 25 years. The story further unfolds revealing animosity between cousins Amarendra Baahubali (Shiva’s real father) and Bhalla Deva. The rest of the movie needs to be seen, I don’t want to be joy killer.

There was one moment is movie where Devasena is telling Kattappa (the king’s royal body guard) that my son will come, strangely it reminds you of Rakhi in Karan Arjun “Mere karan Arjun Ayenge”. In another scene where avalanche strikes them, it reminds you of the movie-The Day after Tomorrow. Acting wise I was impressed by Sivagami, though Tamannaah failed to impress. Even the love story between Prabhas and her started getting on nerves. The real movie starts after 35 minutes, when Prabhas goes to rescue the chained queen. Nevertheless, let me not be that critical, because overall the movie is good and worth watching.

Reasons to see the movie: