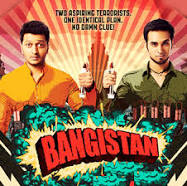 Recently I have seen many movies, but after ages a movie made me wonder, why the hell I am wasting my time? Seriously this was not expected from Farhan Akhtar and Ritesh Sidhwani production house.

The only thing I liked about the movie, it was made with an intention to give a noble message. But unfortunately, the message reminded us a lot about movie P.K. The movie start in Bangistan, where fighting is considered cool. The good thing about the place was,  the Hindu guru and Islam Maulvi were united in a common cause, to bring peace to the world. Good intentions should always be supported with good story line, which is not the case with this film. Ritesh Deshmukh and Pulkit Samrat are selected to become human bomb. They both reach Poland, where International Conference of Religions was being held. Ritesh belongs to Muslim sect but he uses a hindu get up, in order to avoid suspicion. In a similar manner Pulkit opts for muslim get up, in spite of being a staunch hindu Brahmin. In order to perform their part better, they both read each other religious books and in the process get to know each other religion. The film dwells more on how they have a change of heart and they understand the true meaning of religion.

The concept is good, no denying on that part but the treatment is bad. The first half becomes a drag, where many times I had an impulse of leaving the theatre. Nothing much to look forward to in second half. Ya, one thing is commendable and that is Ritesh acting. Pulkit has over acted at maximum places, he needs to get out of that Punjabi boy groove and add versatility to his acting.

Why should you avoid the movie: