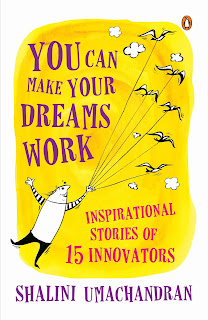 India is going through a very exciting phase, where the youth wants to experiment with life. They are consciously leaving the safe road and opting for road less traveled. This change in attitude is visible in metros and very soon Tier-2,Tier-3 cities will follow the lead. Look around, every day we find someone leaving his cushy job and achieving his dream. Gone are the days, when people look only for 9-5 job, today’s generation want to live their dreams.  All these facts, at times make us wonder, are we missing the bus? With so many VC’s pumping money, people opting for offbeat professions, opening up of the society, this is the best time to be in India . The same fact is stated by Shalini Umachandran in her book -You can make your dreams work.

The book contains story of 15 innovators, who did something unconventional, because they had firm belief in their dreams. As I mentioned in my previous blog, I don’t read book just for the heck of it. I am very adamant on one thing that by the end of the book, if I haven’t learnt anything new, then time spend on that book is utter waste. Thankfully I learnt a lot from Shalini’s book. The best thing I liked that, apart from talking about regular innovators, she also focussed on those innovators, who came from middle class, gave up their cushy jobs and went in search for their long lost passion.

I especially liked the story of Rahul Devesher, who wanted to be a pilot, but destiny forced him into media planning. Rahul was like other normal kids, with only one difference he was eating, sleeping and drinking aeroplanes. He tried clearing NDA, but was rendered unfit. It was a major setback for him, he lost interest in everything and as a result he flunked in class twelfth boards. After that he joined regular courses and finished his management course from MICA. He went to Mumbai and joined Mindshare. That’s where the turn happened, he met people who quit high paying jobs for their dreams. He decided to go for Commercial Pilot Licence and quit his job. After clearing some more road blocks, he got his licence. Today he is a full-fledged pilot, who is doing what he always wanted to do. Now here is a hero, who is very much like us, who stumbled, failed yet never ignored his inner call.

I don’t deny that life is tough but then we have to understand that dreams are there to be lived, and are not there as a part of wishful thinking. This book will motivate you to go on a journey, which you might have long forgotten.

Why should you read the book: