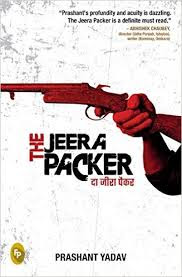 The Jeera Packer is a political thriller written by Prashant Yadav and published by FINGERPRINT!.


Strong recommendation, even if you don’t like politics but love thrillers, then this book is must read. We all know that politics is dirty and no normal person can survive here. But once you read this book, one will get a fair idea about how bad it is. Kudos to Prashant, for picking up a complex topic and weaving an engaging plot around the same. Nowhere the story loose grip, it keeps you hooked right from beginning till end.  The story is based around UP politics and Delhi get a liberal mention. 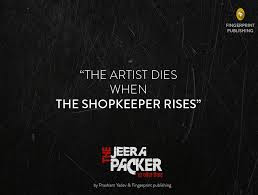 The central character is a Jeera Packer, ex sharp shooter , he was much dreaded at some point of life. But then he left the underworld for a stable and happy family life.  He manages a grocery store along with his wife. His only  connection with his past -is his friend Abdul. He, Abdul and Lal Mani used to work  for Dada, and would happily pull trigger at dada’s instructions. Now Abdul manages  his garage, where he repairs bikes, majorly bullets. Lal Mani is still with Dada and is part of his core team. After two decades, the sharp shooter is thoroughly bored with his idealistic life and want some action. He decides to shoot his old mentor-Dada, the current CM. Dada is an old political fox, who has got respect for no one, in the thirst for power he created more enemies then friends. Unknowingly, apart from the sharp shooter, many people from the core team want CM to be eliminated. Also, his son Mithles is a drug junkie, who is not ready to shoulder the political responsibility. Prashant has beautifully mixed everything and gave it a nice bollywood tadka.  To know the rest of the story, would recommend you to pick up the book.