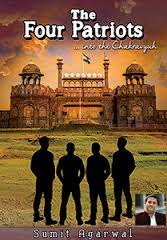 The Four Patriots is written by Sumit Agarwal and published by Rupa.

The novel is a steady cocktail of reality and fiction. Many incidents mentioned in the novel are loosely inspired by the reality. The novel talks about four individuals, who are not happy to be bystanders, but want to do something to change India. They come from different backgrounds and have different temperaments, but are still tied together by patriotism. 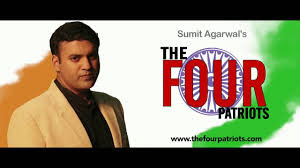 The four patriots are: Varun an NRI software engineer, Salman, orphan raised by hindu parents, CEO of Coffee Moments, Raghav, a virtuous politician, who is ill-treated by his uncle and cousin brother. Last but not the least is Aditya (this character closely resembles the author) an altruistic businessman, who runs ngo, and want to change the shape of India. All the four gather under the guidance of Dr.Sabbarwal, with a common goal-Change India.  In the process they face lots of twists and turns, rival party chief Jatin, employs all the tricks under the sun, to get the four eliminated. But somehow, they come out unaffected. 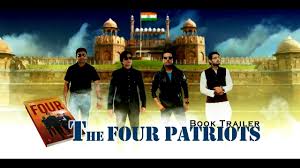 The novel contains lot of Bollywood tadka. At times you wish, the author had made the plot less melodramatic.  Another bothering thing was, less or ornamental use of women in the novel. I think we are moving towards gender equality and the females are equally worthy contenders in the field of politics. Take the case of Chavi Rajawat, who after returning from abroad, came back to her village and became sarpanch. Till the time authors, would keep on considering women as showpiece, Indian literature will not progress.

The author goes overboard, when he made Raghav-the Sports Minister , to jump into the pool, to save the honor of India in Olympics. This incident will remind you of Rohit Shetty movies, where anything can happen.

The book is nice, take it as a Bollywood movie, one time read. And yes, it will definitely invoke the feeling of patriotism in you.