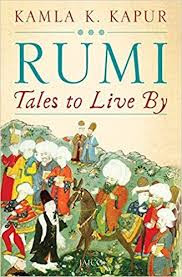 Rumi-Tales to live by interpreted by Kamla K.Kapur and published by Jaico Books.

In today’s world when spirituality is a fad, and materialism is in, such reads are desperately needed. The problem with our scriptures, old stories, dohas, poems etc are, too complex to interpret.  They contain ocean of wisdom, but intellectuals are needed, who can interpret them in a simple language, and present them to the current generation.  Naturopathy, Yoga, Ayurveda all are making their presence felt, so why not such books. 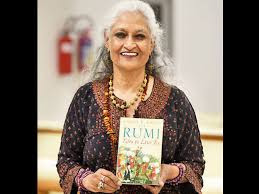 Kamla K Kapur interprets the 13th century sufi poet Rumi’s work in an engaging manner. She speaks the language, which reader can understand easily. The writer tries to show us the bigger picture, she wants us to discard the myopic view of life and incidents, examine the bigger picture. Then only we will be able to interpret life fully. 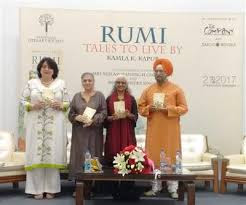 Though the collection is priceless but I especially liked the story- The dark flower of justice. It is a story of Great King David, Hamza and Nasirrudin.  The story clearly indicate- the role of Karma in once life. Nasirrudin, was a lazy person, who do not want to work hard, but still aspires, to lead a good life. One day, while sitting in prayer, a cow barge in his room, he kills the cow and calls the butcher to clear the hide. In the meantime the owner of the cow Hamza, comes in, abuse and thrash Nasurrudin ,and take him to King David, for justice. After hearing the case, King David pronounce Nasirrudin culprit, but then something stops him, and he ask the crowd to let him meditate over the case, for a day. The next day the king declares that Hamza is guilty.  He reveals, Hamza at some point of time, was slave to Nasirrudin grandfather, he killed the grandfather and the father, stole the cows, wealth and other objects, thus rendered the family penniless. So, now it is payback time for him.

I simply marveled, at the simplicity of the story, and the way karma theory is explained. This is not the only story, there are many others, guiding us to the eternal truths. 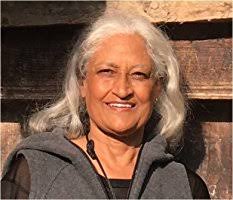 I would definitely recommend the book, this is for serious reading. It is like a delicacy, take your time and enjoy every morsel.